Battle for Azeroth - My Favorite Questing Moments From 8.0-8.2 - Alliance Only

I restarted playing World of Warcraft: Battle for Azeroth when path 8.2 released about a month ago. This is the most time I've spent with the game, since the release of this expansion. I would return for past expansions, only to play a couple weeks to hit the level cap before moving onto something else. While I was already at 120 from the BFA release, I focused on completing the War Campaign, the new zones, and trying out the new Heart of Azeroth Essence system. While there i 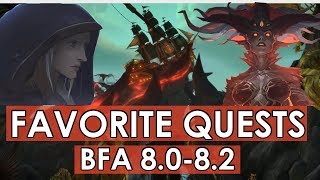